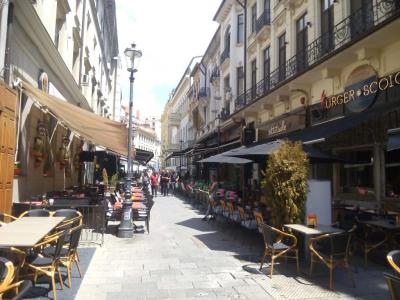 Perhaps the busiest street in the Lipscani area of Bucharest, Strada Smârdan (Smardan Street) is one of the first streets in the historic center to have been renovated and paved. The street describes a circular arch from north to south, and extends for 370 meters.

The first historical record of Smardan Street dates from the 17th century. Back then it was known as the German Street or the Germans Street, and was described in a document of May 1, 1672 as an alley leading from the Royal Court to the Greek Church. In the Bucharest Plan of 1871 the street appears as German Alley, and in 1878, it acquired the current name. The latter evokes one of the battles won by the Romanian army in the village of Smârdan (nowadays, part of the village Inovo) in the Vidin region, near Bulgaria.

In the 19th century, the street underwent substantial development, with numerous shops built on, as well as some prominent hotels. One such was the Brenner Hotel or Hotel D'Europe, which in 1820 was mentioned by Consul Wilkinson as "well furnished and equipped with everything you need; very useful for travelers."

Another local hotel, the former Concordia Hotel at number 39, made history on the night of January 23, 1859, when the leading members of the National Party unanimously elected there Alexandru Ioan Cuza to be the Prince of Moldavia and Wallachia, thus fulfilling one of the dearest dreams of the Romanian people – a unified state. Attesting to this fact now is a memorial plaque marking the spot.

It is also worth pointing out that until the 1960s trams had run along the street here, which is somewhat incredible given how narrow it is in places.

Presently, Smardan Street is a home to an array of bars, pubs, cafes and restaurants.
Image Courtesy of Wikimedia and Nickispeaki.
Sight description based on Wikipedia.