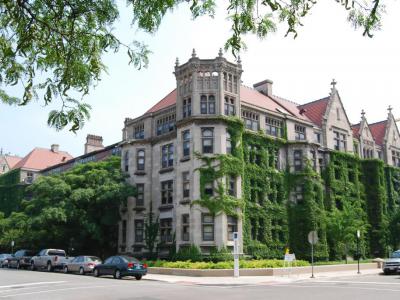 Amos Jerome Snell Hall and Charles Hitchcock Hall, more commonly known as Snell–Hitchcock (colloquially Snitchcock), make up a residence hall at the University of Chicago. The dorm is on the northwest corner of the University's main quadrangles at the corner of 57th St. and Ellis Avenue. It is connected via emergency exits to Searle Chemistry Laboratory. Built in 1892 (Snell) and 1901 (Hitchcock), they are the oldest residence halls still in use as such on the university's campus.

Hitchcock was built in 1901, and is listed in the National Register of Historic Places. It is built in a Collegiate Gothic style, like Snell and most of the University of Chicago's campus, but has many Prairie School elements, such as stone corn husks instead of gargoyles and flat-roofed instead of gabled dormers.

Built in 1892, Snell is half the size of Hitchcock, housing approximately 50 residents on four floors. It has the distinction of being one of the first women's dorms on a coeducational campus. In the beginning, it only housed women for two quarters; once the intended women's dorm opened, Snell was turned over to the men. All the rooms are singles, except for a two-room suite on the second floor. Three of the four floors are of mixed sexes, while the third floor is women-only.
Image Courtesy of Wikimedia and Blanham.
Sight description based on Wikipedia.