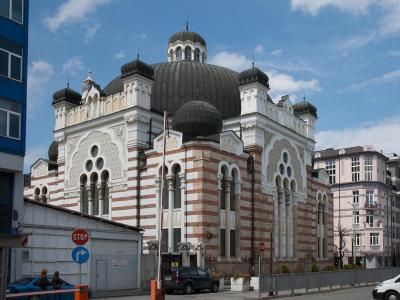 The architectural style is essentially Moorish Revival, with elements of the Vienna Secession and, in the facade, Venetian architecture. The main premise has a diameter of 20 m and is 31 m high. It is topped by an octagonal dome. The interior is richly decorated, featuring columns of Carrara marble and multicoloured Venetian mosaics, as well as decorative woodcarving. The entire building takes up 659 m².
Image by Vassia Atanassova - Spiritia on Wikimedia under Creative Commons License.
Sight description based on wikipedia