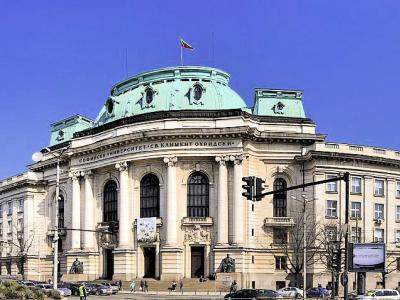 The St. Clement of Ohrid University of Sofia or Sofia University (Bulgarian: Софийски университет „Св. Климент Охридски“) is the oldest higher education institution in Bulgaria, founded on 1 October 1888. The university's edifice was constructed between 1924 and 1934 with the financial support of the brothers Evlogi Georgiev and Hristo Georgiev, whose sculptures are now featured on its façade, and has an area of 18,624 m² and a total of 324 premises.

Sofia University has 16 faculties and three departments, where 14,000 students receive their education. In addition, it also disposes of a university library, a university press, a computer centre, a sports centre and several other structures. The current rector is Ivan Ilchev. Sofia University is ranked 754th in the world and 325th in Europe by the Webometrics Ranking of World Universities.
Image by Todor Bozhinov on Wikimedia under Creative Commons License.
Sight description based on wikipedia