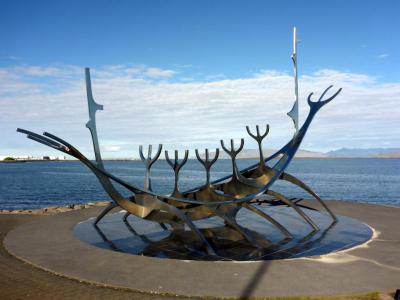 Sun Voyager is a sculpture by Jón Gunnar Árnason (1931-1989), located next to the Sæbraut road in Reykjavík. It is described as a dreamboat or an ode to the sun. The artist intended it to convey the promise of undiscovered territory, a dream of hope, progress and freedom.

The work is constructed of quality stainless steel and stands on a circle of granite slabs surrounded by so-called “town-hall concrete”. It was constructed in accordance with Jón Gunnar’s enlarged full-scale drawing of Sun Voyager and was overseen by Jón Gunnar’s assistant, the artist Kristinn E. Hrafnsson.

Why You Should Visit:
Great subject for photographs as it provides a nice vantage point to look out into the waters and think of very deep things.
Image by javier.losa on Flickr under Creative Commons License.
Sight description based on wikipedia