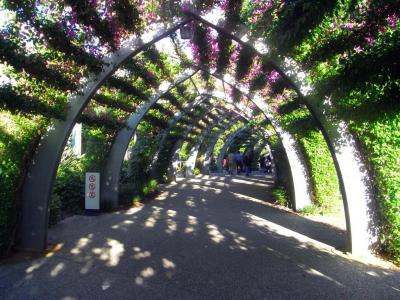 South Bank Grand Arbour is a pedestrian walkway between Vulture Street, near Griffith Film School, and the Queensland Performing Arts Centre. The Arbour Walkway, as it is often called, cuts through South Brisbane War Memorial Park, past the Griffith University Art Museum and by many shops and eateries.

The arbour walk is about 1 kilometer in length, making it only a little more than half a mile. Tourists can use the walkway to reach the Queensland Maritime Museum, the Picnic Island Playground, the Clem Jones Promenade and Streets Beach.

The walkway was designed by Denton Corker Marshall architectural firm. It is composed of 443 steel columns that curl overhead. The columns are lined with bright pink bougainvillea. Thanks to the climate in Brisbane, the bougainvillea vines bloom for most of the year.

South Bank Grand Arbour is open to pedestrian traffic 24 hours per day. The flowers are best viewed in the daylight but multicolor lights create a safe and lovely walk even once the sun has set.
Image Courtesy of Wikimedia and Gordon Wrigley.