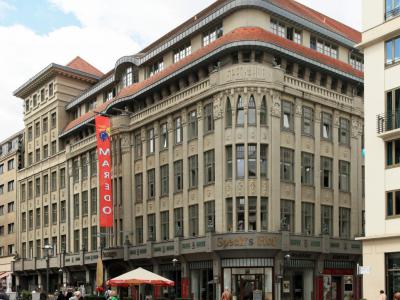 Specks Hof is a commercial building with the oldest preserved shopping arcade in Leipzig . The complex near the Nikolaikirche is an example of Leipzig's trade fair and trading houses that were built at the beginning of the 20th century.

Speck's yard is six stories high. On the first three upper floors, the principle of the support and beam system can be clearly recognized by the emphasis on the continuous pilasters . The upper two floors are slightly set back behind a balustrade or a narrow strip of roof. In each of the three adjoining streets there is a basket arch-like passage entrance, each of which is emphasized by a rounded risalit just like the two corners of the building . On the one with trachyttuff and artificial stoneOn the clad front there is plenty of architectural decoration both in stone and on the base above the ground floor and above the third floor in copper. The figures are borrowed from the Greek world of gods and bear no relation to the purpose of the building.

The southern part of the front on Nikolaistrasse, which was built later, differs in design from the rest of the building. It is kept simpler and, instead of the two upper floors, has a three-story tower-like structure with a pyramid roof that extends beyond the ridge line of the outbuildings.

The ground floor of the building is traversed by barrel-vaulted passageways, some of which still have an embossed copper ceiling. A corridor runs from Reichsstraße to Nikolaistraße with a branch into Schuhmachergäßchen; a branch leads to the Hansahaus. The corridors are interrupted by three glass-covered atriums, which are labeled A, B and C starting in the west and have floor areas of between 40 and 50 m². Your walls are artistically designed.
Image Courtesy of Wikimedia and Frank Vincentz.
Sight description based on Wikipedia.