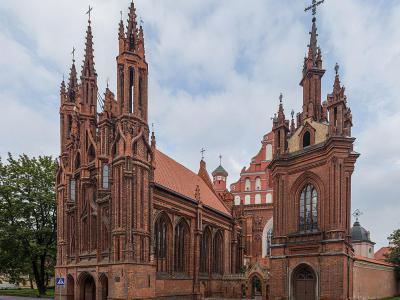 St. Anne's Church is a Roman Catholic church in Vilnius' Old Town, on the right bank of the Vilnia River. It is a prominent example of both Flamboyant Gothic and Brick Gothic styles. St. Anne's is among the features of Vilnius Old Town that enabled the district to be included in the list of UNESCO World Heritage sites. A novel approach to bricks as a construction material was employed in the church's construction. The main facade, designed in the Flamboyant Gothic style, is its most striking feature. Traditional Gothic elements and shapes were used in unique ways; Gothic arches are framed by rectangular elements dominating a symmetrical and proportionate facade, creating an impression of dynamism. The church has one nave and two towers. It was built using 33 different kinds of clay bricks and painted in red. The interior is decorated in the Baroque style, as is its altar. The imitative neo-Gothic bell tower, constructed in the 1870s, stands nearby.

Operation hours: May - September: Tuesday - Sunday 10 am - 6 pm;
October - April: half an hour before masses (they take place at 5.30 pm on weekdays and on Sundays and holidays at 9am and 11am in the Lithuanian language).
Image by Algirdas on Wikimedia under Creative Commons License.
Sight description based on wikipedia