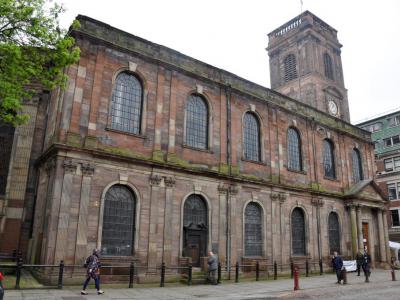 St. Ann’s Church is a Grade I listed, 18th century temple located in front of St. Ann’s Square, at the heart of Manchester’s shopping district, where the fashionable shopping avenues of New Cathedral Street and Barton Arcade converge. The church was consecrated at this spot in 1712, when Manchester was little more than a rural parish town. Named after St. Anne, the church’s shortened name is a reference to Lady Ann Bland who was its first patron. The building was redeveloped during the Victorian era, with its red Collyhurst sandstone exterior replaced with harder wearing stone, and stained glass windows installed.

The completion of the church marked the rise of Manchester as an urban centre. Within ten years, St. Ann’s Square had been laid out in front of the church, based on the fashionable squares found in Bath and London. The church thus became so central to the city’s development that its bell tower is still considered the centre of the city. The benchmark which surveyors used to measure distances to Manchester’s satellite towns can still be seen at the base of the tower. A Church of England place of worship, St. Ann’s Church welcomes visitors and still holds regular Sunday services.
Image by The National Churches Trust on Flickr under Creative Commons License.