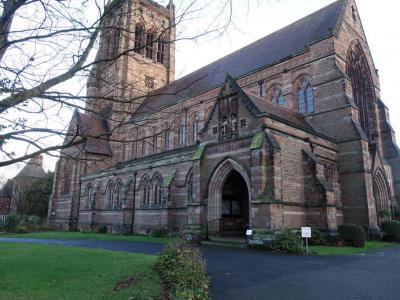 St. Barnabas is a church in the Liverpool suburbs, made famous by the street it stands on – Penny Lane – that served as an inspiration for one of the Beatles’ best loved songs. The church was frequented by the Beatles songwriter and bass player, Paul McCartney, who at one point was even a member of the local choir. The church once had a hall further down the lane, which once played host to a gig from the fledging Beatles. The church welcomes Beatles fans from all over the world each year, and includes a wry nod to the band even in its service – the altar is emblazoned with the famous Beatles lyric “We Can Work It Out”.

St. Barnabas is an Anglican church, serving the Mossley Hill parish. It has existed in its current location since 1914, having previously been housed in a temporary iron building, of which there were many in the early 20th century. The church holds communion on Sundays at 8.30am, 10.30am and 6.30pm, and on Thursdays at 10.00am. There is also a morning prayer service on Tuesdays at 7.15am. If you would like to tread in the footsteps of Paul McCartney, and can hold a tune, the St Barnabas Choir is still in operation and meets every Thursday evening at the church.
Image Courtesy of Flickr and silver-novice ~ ne res adv.