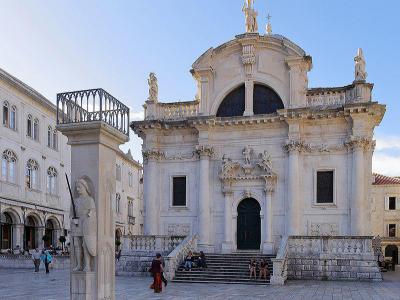 This church is named after the local patron saint of Dubrovnik, St Blaise (Sveti Vlaho) – formerly the protector of the independent Republic of Ragusa – whose relics: both hands and a bone fragment of the face are held inside. The image of the saint is carved in stone on all Dubrovnik's fortresses and the bastion, as well as above all the city gates and on all official seals and coins. A feast in his honor is held each year on February 3rd.

The church was originally built in the 14th century, featuring the then very popular Romanesque style which was prevalent in that period's local architecture. The great earthquake of 1667 damaged the building extensively. It was totally lost to a fire in 1706, following which - in 1714 - the church was remodeled on Sansovino's Venetian church of San Maurizio in a Baroque style.

The centerpiece of the interior is the beautiful golden statue of St. Blaise holding a scale model of the Romanesque church which was destroyed by an earthquake in 1667. Crafted in the 15th century by an unknown local master, the statue stands on the main altar of the church and is the only piece that had survived the fire of 1706.

The church’s front steps provide setting for some of the most important events in the life of the city, including New Year’s Eve and the opening night of the Dubrovnik Summer Festival. There is also a market out front with numerous crafts and food offerings (honey, jams, olive oils, sugared fruit and nuts).

Why You Should Visit:
Unlike a lot of churches, this one is light, bright, less foreboding, but equally pretty and beautiful.

Tip:
It can get quite crowded inside, so go early in the morning or later in the evening, or when the service is on to sit by yourself.
Whenever you go, make sure to check out the beautiful stone carvings above the door.