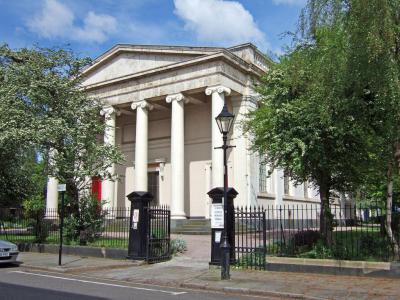 St Bride’s Church was designed by Samuel Rowland, and consecrated in 1830. Built for esteemed local reverend James Haldane Stewart, the Grade II* listed building is widely considered to be the finest surviving Neoclassical church in Liverpool. It is situated on Percy Street, in the historic Canning district of the city centre. The church’s exterior is typical of many grand Classical buildings in the city. Fronted by a six column portico entrance, from the main road it resembles a Greek temple rather than an English church.

Whilst the church is well known for its beautifully preserved exterior, there are some interesting artefacts to be found inside too. There is a monument to the Reverend Stewart housed in the chancel, next to a memorial for a local family that perished in the Rothsay Castle disaster of 1831. The Rothsay Castle was a steam boat which ferried families from Liverpool to the beaches of North Wales in the early 19th century, before tragically running aground on a voyage, leading to the deaths of 130 people.

Still an active religious and community centre, St. Bride’s is the parish church for the University of Liverpool. It also hosts events as part of Liverpool’s Biennial art festival, one of many artistic events that led the city to be named European Capital of Culture in 2008.
Image by David Humphreys on Wikimedia under Creative Commons License.