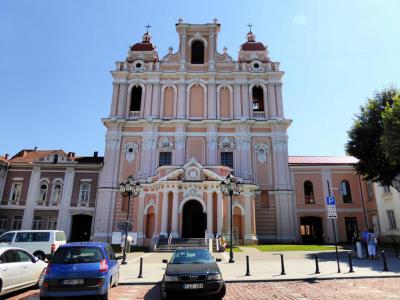 St. Casimir's Church was named after the patron saint of Lithuania, Prince Casimir Jagiellon. It was founded in 1604 by the Jesuits. St.

The Church of St. Casimir is one of the earliest exemplary Baroque buildings in the city; however it also displays Gothic and Renaissance elements. Its spatial composition and facade were designed along the line of the famous Il Gesù church in Rome. The shape of the building was modeled after the churches in Kraków and Lublin, with additional towers. The author of the design was Jan Frankiewicz, a pupil of architect Giovanni Maria Bernardoni.

In the middle of the 18th century the church was reconstructed by architect Thomas Zebrowski. Under his supervision a stepped lantern cupola with a crown was erected. This large and impressive cupola is unique in the entire region of the former Grand Duchy of Lithuania.
Under Russia's occupation the church of St. Casimir was converted into a Russian Orthodox church. In 1915 Vilnius was occupied by the Germans and the church was converted into the Evangelical Lutheran prayer house of the Vilnius Garrison. In 1919 the church of St. Casimir was returned to the Catholics, but was damaged again during the Second World War, closed down and in 1963 converted into a Museum of Atheism. The church was reconsecrated in 1991.

The church is known for excellent acoustics and organ concerts with renowned international musicians.
Image by Mikel Santamaria on Flickr under Creative Commons License.
Sight description based on wikipedia