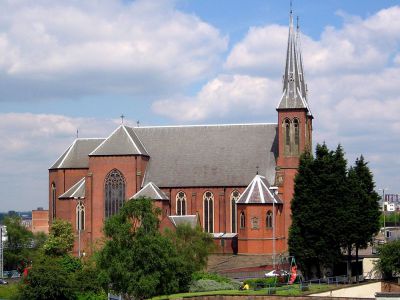 The Metropolitan Cathedral Church and Basilica of Saint Chad is the mother church of the Archdiocese of Birmingham. This is one of the first four Catholic churches built in the country after the English Reformation initiated by King Henry VIII in 1534. Designed by Augustus Welby Pugin, one of England's most renowned Gothic Revival architects, who lavished much care on this particular building, it was substantially complete by 1841 and raised to cathedral status in 1852.

Situated in the Gunmakers Quarter of Birmingham, St Chad's was seriously endangered during World War II. An incendiary bomb fell through the roof of the south aisle on 22 November 1940 and bounced from the floor into some central heating pipes, which then burst. Luckily, the water from the damaged central heating pipes extinguished the fire. A thanksgiving tablet appears in the diapered design of the transept ceiling, reading Deo Gratias 22 Nov 1940 ('Thanks be to God').

In 1941 St Chad's was declared a Minor Basilica by Pope Pius XII as a church of important historical connections – currently there are only four such basilicas in England. The cathedral's patron is Saint Chad, a 7th-century Bishop of Mercia. Some of his long bones have been enshrined in the canopy above the altar, as relics.

In 1932 St. Chad's was extended by the addition of St Edward's Chapel, designed by Pugin's grandson, Sebastian Pugin Powell. Sadly, in the 1960s a number of Pugin's fittings were removed and the interior repainted, to the detriment of the original design. Hence, the cathedral's current appearance features only some of Pugin's surviving work.

The green public space near Birmingham Snow Hill station, in which the cathedral is located, is now called St. Chad's Queensway after the cathedral.
Image by G-Man on Wikimedia under Creative Commons License.
Sight description based on wikipedia