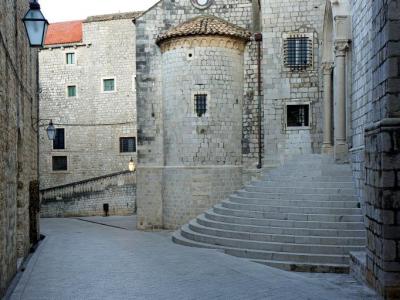 Highlighted by the Dominican monastery – hence the name, St. Dominic Street connects Ploče Gate with Stradun. Perhaps somewhat unimpressive at a glance, this narrow street has been nonetheless one of the most recognizable in Dubrovnik as of lately. It gained fame after being used in several of the Game of Thrones episodes, providing location for most of the market scenes in King's Landing and the ones featuring the City Watch.

It was also the location where the killing of one of King Robert’s bastard sons by the Gold Cloaks took place. Another notable appearance was in Season 2, Episode 5 ‘The Ghost Of Harrenhal’ where Tyrion and Bronn witnessed a protest speech against the Lannisters – Cersei and King Joffrey, described as ‘fruit of the incest’, delivered from the steps of the Monastery. In Season 5, Episode 10 ‘Mother’s Mercy’, Cersei Lannister took a naked walk through this street, as a sign of penance.
Image Courtesy of Flickr and Dennis Jarvis.