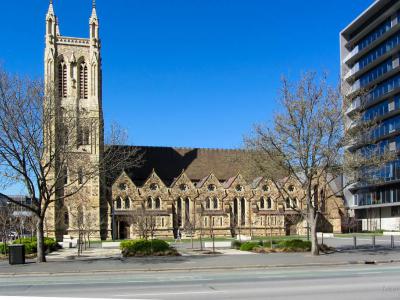 St. Francis Xavier's Cathedral is a Roman Catholic cathedral. Construction of the building began in 1856. It was consecrated two years later, but it was not fully completed until 1996. The Early English, Gothic Revival style cathedral has had a series of architects over the years. These include original architect Richard Lambeth, followed by Charles Hansom, Peter Paul Pugin and finally Lynton Jury.

The last component of the cathedral was the bell tower. Though construction of the tower started in the 1800s, it took 109 years for it to reach its final height. The main bell is the Murphy Bell of 1867, which is surrounded by 13 bells. Seven of the 13 accompanying bells once hung in Sydney's St. Mary's Cathedral.

Those visiting St. Francis Xavier's Cathedral should note some of the church's special features. These include bronze statues of Joseph and Jesus, a statue of St. Patrick and a statue of St. John the Baptist, which was created in Tuscany in 1925. The cathedral also features stained glass lancet windows with images of St. Patrick, St. Lawrence, Mary and Jesus.

The cathedral has a daily mass at 5:45 PM. It is open throughout the day for those who would like to visit.