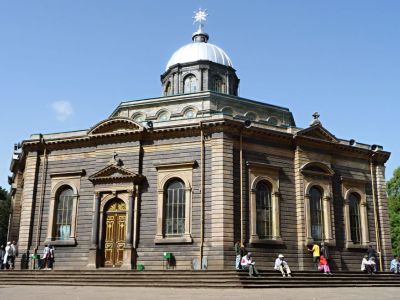 The Cathedral has a museum where it displays an Imperial throne and weaponry used in the wars against the Italians including curved swords and tridents and giant helmets made from the manes of lions.
Image by Ondřej Žváček on Wikimedia under Creative Commons License.
Sight description based on wikipedia

This sight is featured in a self-guided walking tour of Addis Ababa, Ethiopia within the mobile app "GPSmyCity: Walks in 1K+ Cities" which can be downloaded from iTunes App Store or Google Play. Please download the app to your mobile phone or tablet for travel directions for visiting this sight. The app turns your mobile device to a personal tour guide and it works offline, so no data plan is needed when traveling abroad.