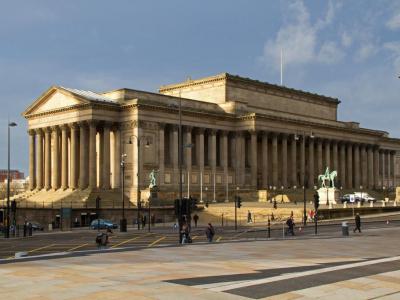 Considered as one of the finest neo-Grecian buildings in the world, St George's Hall is a great example of Liverpool's neoclassical architecture. This Grade I listed building's Greek-columned facade is both impressive and imposing. The St. George's Hall hosts social events, including live music, and is open for visitors free of charge. Also, you can also book a guided tour online and be greeted by the friendliest of guides welcoming you to spend well a few hours inside.

The main entrance is in the centre of the east façade and is approached by a wide flight of steps. The front has a central portico of 16 Corinthian columns flanked on each side by series of square pillars. Between these pillars are reliefs which were added between 1882 and 1901. The roof is a tunnel vault carried on columns of polished red granite. The walls have niches for statues and the panelled plasterwork of the vault has allegorical figures of Virtues, Science and Arts.

The highly decorated floor consists of 30,000 Minton tiles. The doors are bronze and have openwork panels which incorporate the letters SPQL (the Senate and the People of Liverpool) making an association with ancient Rome. The organ is at the north end and at the south end is a round arch supporting an entablature between whose columns is a gate leading directly into the Crown Court. The building also houses the world's first air-conditioning system from Victorian times.

Why You Should Visit:
Wonderful architecture from a time when bureaucracy knew that, if they were going to keep you waiting half an hour to fill in a form, then it may as well be somewhere nice!

Tip:
Try and find out when the original tile flooring is on show, as that is a perfect time to go (doesn't happen very often).
Don't miss the coffee shop on the ground floor – superb value and quite reasonably priced and atmospheric.