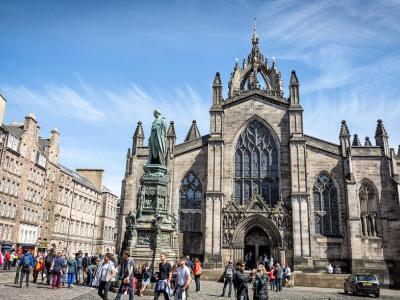 St Giles’ Cathedral, otherwise known as the High Kirk of Edinburgh, on the Royal Mile is the one you definitely wouldn't want to miss. The first church on this site, put up in the 12th century, was destroyed by fire; only the central pillars remain. The second church, built in 1385, over a period of time had many chapels added, giving it a rather haphazard appearance. At one time, the church boasted over 50 side altars, called aisles.

In 1466, the cathedral became a collegiate church, to which the lantern tower, in the form of a crown, was added in 1490. During the Reformation in 1560, most of the church’s treasures were removed, stolen or sold, including the most precious relic – St Giles’ withered arm and hand which had a diamond ring on one skeletal finger. The church itself was separated into numerous preaching halls by partition walls during that period.

Although called a cathedral, it was only one for two short periods of time during the Bishop Wars in the 17th century, so its statute of High Kirk is more important. It was restored in the 19th century, the partitions were removed and several chapels pulled down. The most beautiful of all the remaining ones is the Thistle Chapel, built in 1911 in a 15th-century High Gothic style. The wood and stone carvings are marvelous; it is filled with heraldry banners and has a breath-taking delicately carved vault.

Among the memorials here are a bronze relief plaque, dedicated to Robert Louis Stevenson, in the Moray Aisle; a marble sculpture of James Graham, the 1st Marquis of Montrose, in the Chapman Aisle; and another dedicated to Archibald Campbell, the 1st Marquis of Argyll, in the St Eloi Aisle. These two men, deadly enemies at the end of their lives, were the main signatories of the National Covenant in 1638.

Why You Should Visit:
Quiet, architecturally very special, and with such a wealth of spectacular stained glass that one cannot be anything else but awed.

Tip:
Entry is free or by donation, but if you want to take pics, you'll need to fork over £2 for a "permit".
Best to get onto a tour as there's much you could miss just wandering on your own. A rooftop tour (£6) is also worth it.
Don't miss the café downstairs. The food is great and it is really cute.
Image Courtesy of Wikimedia and Gary Campbell-Hall.