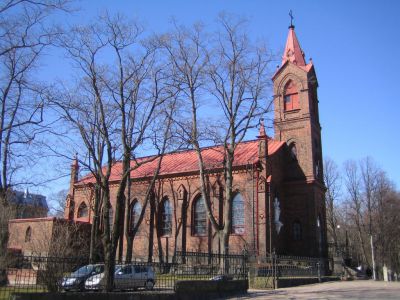 This Roman Catholic Church is the official Cathedral of Helsinki for that faith tradition. It was dedicated to Bishop Henry of Uppsala, who was very famous in the country. Henry was believed to have helped King Eric conquer the country. He also died as a martyr. The building was finished in 1860, and took three years to complete.

The overall architectural style of Gothic Revival was used to design the building. It was given that name for the way in which old Gothic styles have been used alongside neoclassical elements. There are also some beautiful sculptures here of the old bishop, as well as Saint Peter and Saint Paul. You will find these adorning the exterior of the building.

Interestingly enough, there are very few natives of Finland who use this facility for worship. That is because most of the population is Lutheran. It was built primarily for foreigners who come to Helsinki. In an effort, though, to serve the area well, it offers mass in many languages.
Image by Tomisti on Wikimedia under Creative Commons License.

As the capital of Finland and one of the major cities of Scandinavia, Helsinki has a great and interesting history. The city is full of sculptures and monuments dedicated to some of the most important people and events in its history. This self-guided tour will help you visit some of Helsinki's greatest landmarks.