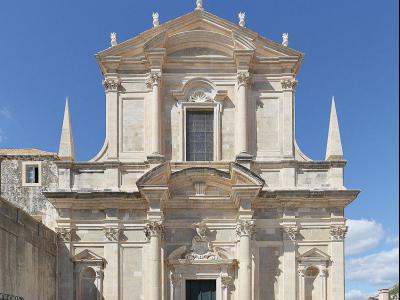 A fine example of an old Jesuit-style Roman Catholic Church, the Church of St Ignatius of Loyola is located on the very southern edge of the old part of Dubrovnik. Construction of the facility was started in 1665 and was delayed for a bit during the great earthquake of 1667, with completion reached in 1725. The designer was Ignazio Pozzo.

Like many such buildings owned by the Jesuit community, this local house of worship was modeled after the Gesu in Rome, which is the main headquarters for the Order. The overall architectural style is done in Baroque. The square in front of the church is a very popular spot for gatherings in the city. It is also decorated with a beautiful stairway, which is a classic example of Baroque style.

There is a small college associated with the complex here as well, which is worth a look. You will want to make note of some of the fine examples of art throughout. The fresco paintings here are quite beautiful. The bell is also the oldest in all of the town.

Why You Should Visit:
The mixture of the location at the top of the now-famous Game of Thrones 'shame' steps, the lack of tourists, and the old detailed interior all contribute to a memorable landmark.

Tip:
Try to visit when the mass is on (there's an English mass on Sundays at 11am during the summer – end of March to end of October) as the lights are on and the inside looks spectacular.
You can reach the church either by the Jesuit staircase that provides a wonderful view as you walk up or by climbing gradually through a maze of back streets that spare you the effort of all the steps.