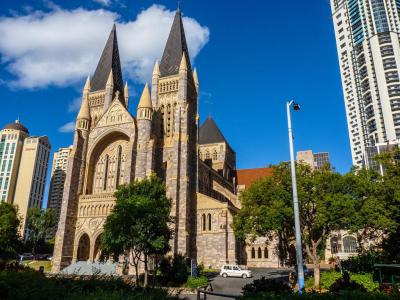 The work has resulted in a stunning Gothic revival cathedral designed by one of England’s most prestigious 19th century architects, John Loughborough Pearson. This was to be his final masterpiece and he died just prior to the final plans being approved. The project was taken over by his son Frank. The most recent additions to the cathedral have been the western spires clad in copper, which were hoisted into place in 2008. One of the highlights of the interior of the cathedral are the mosaics brought back from the “Holy Land” by WWI Australian light horsemen: you can see them in front of the cathedral altar.
Image by Tatters on Flickr under Creative Commons License.