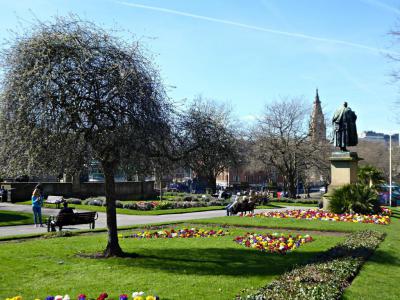 St. John’s Gardens are an area of public park land close to William Brown Street, in Liverpool’s city centre. One of two parks within Liverpool’s World Heritage Site, they are bordered to the east by St. George’s Hall, a fine Neoclassical building which houses law courts and a concert venue. The Green Flag awarded gardens house ornamental shrubs and flower beds, as well as a number of memorials to the city’s famous citizens. These include statues of Liverpool University founder William Rathbone and former British prime minister W.E. Gladstone.

The spot of land, on which St. John’s Gardens now stand, has had a chequered history. Once an area of heath land, known as the Great Heath, the land was swallowed up by Liverpool’s rapid development in the Victorian era. Through the intervening years, it has housed the city’s first hospital, a naval infirmary, an asylum and a range of industries – including potteries, windmills and a marble yard. The site also housed a church (St. John the Baptist) and a cemetery until the church was demolished in 1898. Six years later, the cemetery was relocated, and the land was redeveloped into ornamental gardens by Thomas Shelmerdine, who also designed the nearby Hornby Library.
Image by Colin Hepburn on Flickr under Creative Commons License.