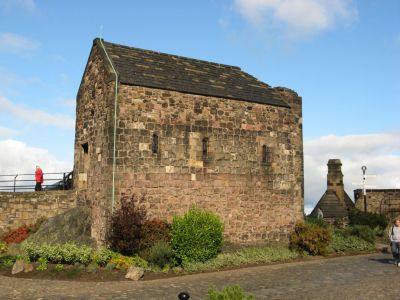 Edinburgh Castle is on the “must” list of every visitor to Scotland’s capital city and St Margaret’s Chapel is perhaps the highlight of the tour due to being the oldest building still standing in the entire complex.

St Margaret was a princess of the House of Wessex. Her family moved to Scotland after the Norman invasion of England. She married King Malcolm III of Scotland and was renowned for her piety and charitable works. According to legend, she prayed every day in the chapel that bears her name, but actually, it was built in her honour by her son, King David I at the beginning of the 12th century.

The chapel features Romanesque style, is 3 metres wide, rectangular in shape with a 4-metre long nave, 3-metre long sanctuary and walls 61 centimetres thick. Between the nave and the sanctuary is a beautiful round arch with chevron mouldings.

In 1314, the castle was captured by the Earl of Moray after a long siege. As was the custom, once the earl gained the castle, he destroyed all the buildings in it, but for some reason he spared the chapel. In 1329, Robert the Bruce left a small sum of money for the chapel’s up-keep.

Between the 16th and the mid 19th centuries, the chapel fell into disrepair and was used as a gun powder storeroom. In 1853, it was restored under the patronage of Queen Victoria. The stained-glass windows representing St Margaret, St Ninian, St Columba, St Andrew and William Wallace were installed in 1929. After further restorations, the chapel was re-consecrated in 1934.

Tip:
Try to visit when it's not too crowded, as it can get claustrophobic in here.