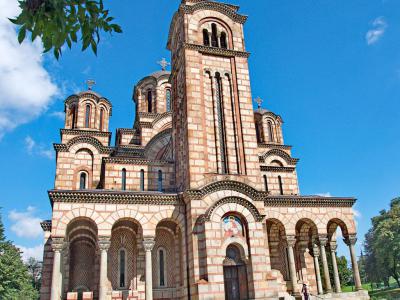 The Church of Holy Apostle and Evangelist Mark, otherwise known as St. Mark's Church, is located in the center of Belgrade in Tašmajdan Park. It is one of the largest churches in the country. It was built between the two world wars, 1931-1940, and its interior is still not fully completed. A Christian place of worship has existed continuously in what is today Tašmajdan Park from at least the nineteenth century. The original St. Mark's Church, built in the days of Belgrade Metropolitan Petar Jovanović (1833-1859) and Prince Miloš Obrenović (1835-1836), stood in almost the same location, just slightly south of the present building. At a time when Turkish troops were still quartered in the city and the present-day Orthodox Cathedral (Saborna Crkva) was built of wood, this was a great spiritual sight for Belgrade. The patron endower of the church was Lazar Panća, a merchant originally from the village of Katranica in Southern Serbia, who died in Belgrade in 1831.
Image by Ranko on Wikimedia under Creative Commons License.
Sight description based on wikipedia