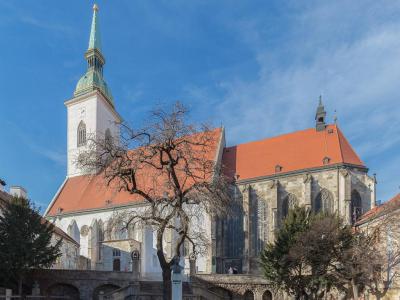 St. Martin’s Cathedral is the oldest and largest cathedral in the area. The history of it is long and closely associated with the Austro-Hungarian royals who used it as a coronation church. Emperors and Empresses such as Leopold I, Maximilian II, Rudolf II, Matthias, Elisabeth Christine and Maria Theresa where all crowned here. The massive spire of the cathedral dominates the city’s skyline reinforced by the bold Gothic features. The incredible stained glass windows also deserve mention. The Cathedral's bell tower displays replica of a Hungarian Crown, while the alter features a massive statue of St. Martin on horseback dressed up in Hungarian regalia, sculpted by Georg Rafael Donner in 1744. Just as many other buildings of that period, the cathedral has survived several fires. Each time it burned down, the ensued reconstruction brought in a mix of new architectural styles which are now visible all over the place. Inside the chapel there are catacombs holding the remains of many prominent Austo-Hungarian historic figures laid down to rest.
Image by J_Makk on Wikimedia under Creative Commons License.