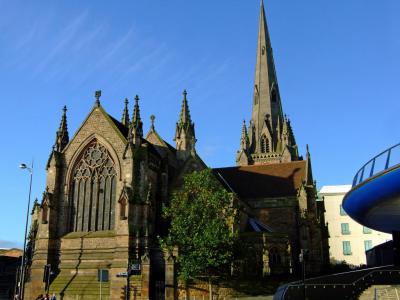 St.Martin's is the original parish church of Birmingham. It stands by the Bull Ring Shopping Centre and the markets. The church is a Victorian neo-Gothic building. It has a high nave and chancel and a spire. The spire was rebuilt many times and thrice struck by lightning.

The church was demolished and rebuilt in 1873 by the architect J. A. Chatwin. The exterior is of Grinshill stone. The inside is of sandstone. Victorian floor tiles by Minton show the arms of the de Bermingham family.

The Blitz of World War II destroyed all the stained glass windows except the near irreplaceable Burne-Jones window. The other windows were replaced by 1954.

The church is provided with 16 bells. This is unusual. Other than St.Martin's, only three rings of sixteen bells exist in the world.

The pipe organ in use today is by Harrison & Harrison. It dates from 1906. Since 2004 the church has stopped using the organ for the 11am service but it is still played at the 9.30am communion and at the 6pm Choral Service.
Image by Futurilla on Flickr under Creative Commons License.