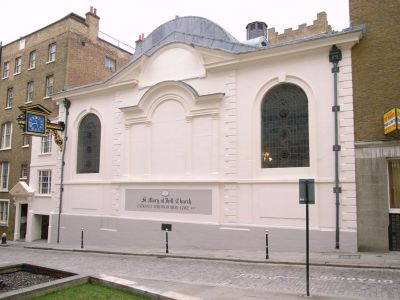 If you would like to see a fine example of a 12th century church, then you shouldn’t miss visiting St Mary-at-Hill in the Billingsgate Ward.

This church was built in the 12th century and called “St Mary de Hull”, later changed to the name it bears today after the Norman influence on the language waned. It isn’t a very large church, being 96ft long and 60ft wide, but it represents one of the oldest buildings in the capital.

The church was damaged during the Great Fire of London in 1666, but Sir Christopher Wren was able to rebuild it, replacing only the east end and the interior. The three other walls and the west tower were undamaged. The interior has four free-standing Corinthian columns that support the barrel-vaulted ceiling which has a Greek cross pattern and a coffered dome in the centre.

In 1787 the west wall was rebuilt and the tower was replaced rebuilt in brick. In 1826 arched iron-framed windows were installed in the north wall. A cupola was added to the dome and windows were set into the chancel vault in 1848.

Sadly a fire in 1988 caused a great deal of damage, and although the roof and ceiling were rebuilt, the woodwork which included the ancient pews and the pulpit were not replaced. Every year the October Festival of the Sea is held in the church – a Harvest Festival with fish and sea food instead of fruit and vegetables – and in June music recitals are given on St Botolph’s Day.
Image Courtesy of Wikimedia and Steve Cadman.
Sight description based on Wikipedia.