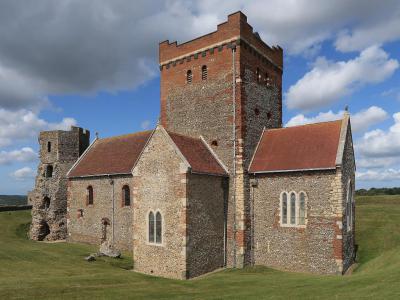 St Mary in Castro, or St Mary de Castro, is a church in the grounds of Dover Castle, Kent. It is a heavily restored Saxon structure, built next to a Roman lighthouse which became the church bell-tower. St Mary serves the local population and the army, and is the church of the Dover Garrison.

The 28 feet high arches at the east and west ends of the crossing appear to be original, and their west faces are outlined by strip work of projecting tiles. A tall round-headed, stone-faced doorway (now blocked and with not much left of its original stripwork outline, but with its typically Saxon alternating horizontal and vertical slabs) gave access to the nave from the south. Unusual double splayed round-headed windows pierce the nave's north and south walls, and Scott (who found them during his restoration) suggested there were another pair near the west end of the nave's side walls. He saw this pair of windows, and putlog holes in the walls for supporting timbers, as evidence for a west gallery, for which space needed to be left between that pair of windows and the west wall.
Image by HBarrison on Flickr under Creative Commons License.
Sight description based on wikipedia