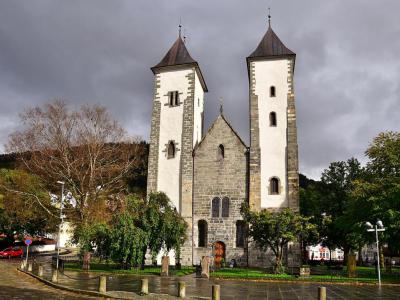 St Mary's Church is the only remaining of the twelve churches and three monasteries built in Bergen between its foundation during the reign of Olav Kyrre (1066–93, traditionally 1070) and the end of the twelfth century. St Mary's Church is likely to have been built by craftsmen from Scania, then part of Denmark. The church's style is remiscient of that of Lund Cathedral in Scania. St Mary's Church is a two-towered, three-naved, mainly Romanesque style church. The eastern part of the choir shows some Gothic influence reminiscent of the Haakon's Hall, likely caused by the reconstruction after the 1248 fire. The church is constructed mainly in soapstone, the oldest parts being built of the highest quality soapstone. Shale is used sporadically. At least three different types of soapstone is used, and it is likely that the stone comes from several different quarries in the district.
Image by Morten Dreier on Wikimedia under Creative Commons License.

This sight is featured in a self-guided walking tour of Bergen, Norway within the mobile app "GPSmyCity: Walks in 1K+ Cities" which can be downloaded from iTunes App Store or Google Play. Please download the app to your mobile phone or tablet for travel directions for visiting this sight. The app turns your mobile device to a personal tour guide and it works offline, so no data plan is needed when traveling abroad.