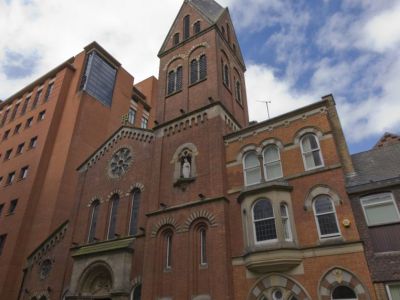 St. Mary’s Roman Catholic Church can be found on Mulberry Street, a quiet cul-de-sac between Deansgate and Albert Square, in the middle of Manchester’s city centre. The church has earned the more familiar local nickname of The Hidden Gem. As you approach and enter the building, the reasons for the name become apparent. Fashioned from unremarkable Victorian red brick and wedged into a typical Mancunian terrace, the church could easily be mistaken for a Victorian factory or mission building. Once through the elaborate entrance door that punctuates the uniform frontage of the building, you are greeted by the exceptional interior of the church.

With its marble altar, Victorian era carvings and life size statues of several saintly figures, the Hidden Gem is one of Manchester's most remarkable religious buildings. The church is Manchester’s oldest surviving Catholic place of worship. Consecrated in 1794, the church has been restored multiple times, most notably in 1833 when the church roof collapsed shortly after a church service. The church is still active and holds mass each weekday at 12.30pm, and on Saturdays and Sundays at midday. St. Mary’s is a welcoming city centre church that allows access for worship and prayer from 10am until 4pm each weekday.
Image by Parrot of Doom on Wikimedia under Creative Commons License.