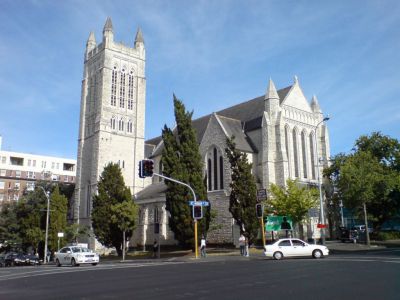 St Matthew’s Church is one of Auckland’s historical religious buildings to be found in the city centre. The church is located to the west of Queen Street and the congregation began to meet there in a simple wooden structure from 1843 onwards, soon after the founding of the city in 1840. The congregation has traditionally been made up of merchants and retailers, which set the church’s coffers in good stead. As the 19th century was drawing to a close in 1896, the parish decided that a grand stone church was needed to reflect the status of the location and congregation and as the city built up in the west. Well known architect John Loughborough Pearson was engaged to design the church, but he was succeeded by his son Frank who completed the design.

In 1902 the foundation stone was laid by the Governor Lord Ranfurly and the neo-Gothic style church was officially opened in 1905. Within the building there is also an ancient stone taken from St Augustine’s Abbey in England. The central location of the church makes it ideal for community involvement with the city’s residents – and the church now holds many civic services as well as developing a strong tradition of community support.
Image by Ingolfson on Wikimedia under Creative Commons License.