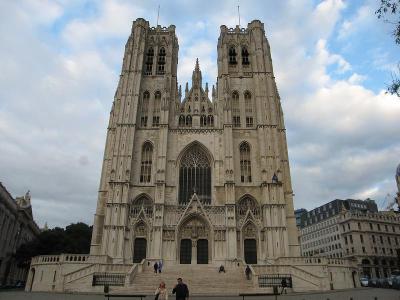 The dramatic St. Michael and St. Gudula Cathedral in Treurenberg Hill has been in place since the early 11th century. In 1047, Lambert II, the Duke of Brabant, had the relics of St. Gudula brought to this site, for which purpose a Romanesque-style church was erected. However, the renovation performed in the late 1400s gave the western facade of the cathedral a totally new Gothic look. Glimpses of the original 11th-century church can now be seen only through the viewing glass spots set in the floor.

Leading to the three gates of the cathedral is a large staircase passing through which visitors can enter the interior dominated by twelve pillars and the detailed stained-glass windows accentuating Gothic style. The window at the bottom of the nave, depicting The Last Judgment, gets illuminated in the evening from within. A standalone attraction inside the cathedral is the dramatic Baroque-style pulpit with ornate detail, featuring Adam and Eve Banished from Paradise, created by Hendrik Verbruggen in 1699. Multiple renovations to the temple occurred throughout much of the 20th century were completed in December 1999, just in time for the marriage of the Belgian Crown Price, Philippe, to his bride, Princess Mathilda. The southern tower of the cathedral carries a carillon made up of 49 bells which are often played during Sunday concerts.

Why You Should Visit:
A monumental piece of architecture complete with outstanding stained glass windows and a relatively new organ perched above everyone's heads to maximize the acoustics.

Tip:
When you first walk in, take a leaflet providing info about the cathedral's origin and details. This way, you will have more appreciation for what you're actually looking at.
There's no admission fee but there is a tiny fee if you want to see the archaeological site beneath the existing floors inside the building.
Image Courtesy of Flickr and erodcust.
Sight description based on Wikipedia.