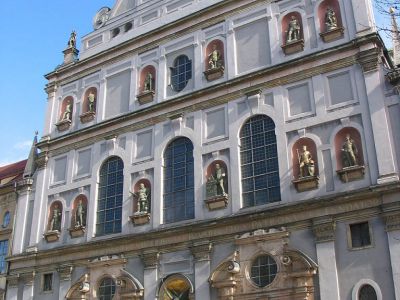 The St. Michael Church in Munich is the largest Renaissance-style religious building north of the Alps. It is managed by the Jesuit order and was built by the Duke of Bavaria, William IV, as a center for the Counter Reformation in response to Martin Luther’s protestant reforms of Christendom.

The church was first built between the years 1583 and 1588 and was designed by an unknown architect. It had an extensive barrel vaulted roof and a tower. The latter collapsed and damaged the newly constructed choir in 1590. After the accident, a grand choir and transept were added to the original structure and the church was consecrated in 1597.

The St. Michael Church is a masterpiece of design. Its façade is divided by three cornices horizontally with figures portraying the agenda of the Counter Reformation. The figure of Archangel Michael, by sculptor Hubert Gerhard, is placed on the ground floor niche. The stone figures in the other niches are of Dukes and Kings of Bavaria. The interior has a nave without aisles that gives it a bright and airy appearance. There is a magnificent Triumphal Arch in front of the choir. The three-story high altar has another sculpture of St Michael fighting the devil, by Christoph Schwarz, as the altarpiece. The crypt holds the graves of members of the Wittelsbach Royal family who ruled Bavaria and those of the sculptor Giovanni da Bologna and Eugène de Beauharnais, the son of Napoleon’s wife Josephine.
Image by Luidger on Wikimedia under Creative Commons License.
Sight description based on wikipedia