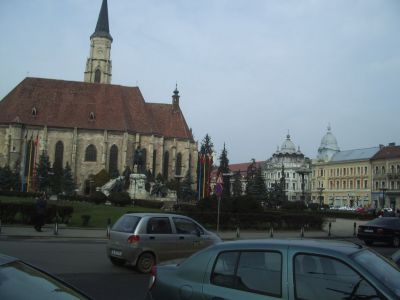 The Church of Saint Michael is a Gothic-style Roman Catholic church in Cluj-Napoca. It is the second largest church in Transylvania. The nave is 50 meters long and 24 meters wide, the apse is 20×10 m. The tower with its height of 76 meter is the highest one in Transylvania. The western portal is decorated with the three coats of arms of Sigismund as King of Hungary, as King of the Czech Kingdom and as Holy Roman Emperor.

The construction was begun probably in place of the Saint James Chapel. The financing of the church was partly done by the citizens, partly from the income of indulgences. The construction was completed between 1442-1447, the old tower was built between 1511-1545. The tower that stands today was erected in 1862.

The oldest of its sections is the altar, inaugurated in 1390, while the newest part is the clock tower, which was built in Gothic Revival style (1837-1862).
Image Courtesy of Flickr and bettyx1138.
Sight description based on Wikipedia.