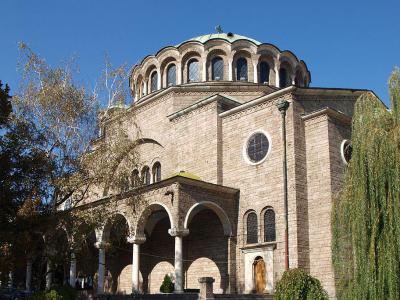 The name Sveta Nedelya is "Holy Sunday." Stephan Gerlach, a German traveler in the 16th century, noted that the church had several names meaning "Sunday." One name was Greek, "Kyriaki." It means "Sunday", but it is derived from "Kyrios", meaning "Lord." There is a martyr named Saint Kyriaki. In Bulgarian, "Sveta Nedelya." And so it goes.

Sveta Nedelya is believed to have been built in the 10th century. Its foundation was of stone but the remainder of the building was wood. In the 18th century Sveta Nedelya became a bishop's residence and the final resting place for the remains of Serbian King Stefan Milutin, which had been on the move since 1460.

The old church was demolished in 1856 to make room for the Cathedral which was to follow. The new building was damaged by an earthquake in 1858. It was finally finished in 1863. In May 1867 it was inaugurated with the help of 20,000 people. A new belfry was added in 1879 to accommodate the carillon donated by Prince Alexander M. Dondukov-Korsakov.

In 1925 the church was blown up by Communist terrorists. By 1933 the church was fully restored. The restoration kept the same size and had a central dome 93 feet high. The floor was renovated and the north colonnade reglazed by 1994. The facade received a cleaning in 2000.
Image by Иван on Wikimedia under Creative Commons License.