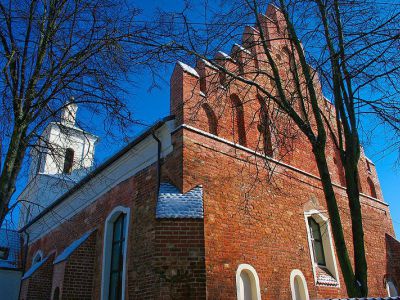 St. Nicholas Church is the oldest surviving church in Lithuania, built in the Old Town of the capital city Vilnius. Originally built in the 14th century, it is mentioned in wriitng for the first time in 1387. Archaeologists believe that the same Roman Catholic church survived till the present day.

Externally, the church represents the Brick Gothic style, while its interior has been renovated several times. The church belfry was built in the 17th century in the Baroque style.. In the interior, four elegant octahedral pillars support web and star vaults. The high altar holds a painting of St. Nicholas with a silver setting from the 16th century. The church is adorned with two sculptures: a polychrome statue of St. Louis from the Gothic period, and Vytautas' bronze bust erected in 1930 (sculptor Rapolas Jakimavičius).
In 1901-39 the Church of St. Nicholas was the only church in Vilnius where the mass was held in Lithuanian. After the World War II, the Cathedral of Vilnius was closed and the Curia of the Archdiocese of Vilnius was moved to the St. Nicholas Parish building and the Church of St. Nicholas in fact performed the functions of a cathedral.

During the Soviet occupation a statue of the patron of Vilnius, St. Christopher, was erected in the church orchard (sculptor Antanas Kmieliauskas, 1959); it was an obvious act of resistance, as the city's coat-of-arms with St. Christopher's figure was banned at that time.
Image by Julius on Wikimedia under Creative Commons License.
Sight description based on wikipedia