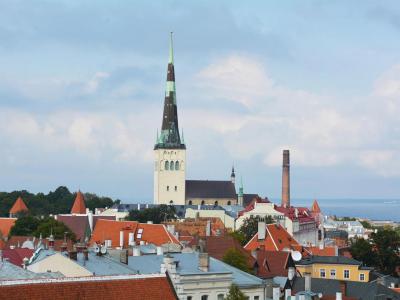 St. Olav’s Church is one of the oldest churches in the city of Tallinn, Estonia. It was built during the 1100s, and has been the center for religious life for the Scandinavian community of the city since then. Many people that attend here can trace their heritage back to when Denmark conquered Tallinn in 1219. The church is dedicated to King Olaf II of Norway though. The oldest surviving records that refer to the church are from 1267.

There is an old legend that the builder of the church, who was also named Olaf, fell to his death from the towers of the church. It adds mystery to this place. There is a painting depicting the event in the Chapel.

Sadly, the building was damaged during the 1300s, and had to be heavily rebuilt. In the 1500s, the tower of the chapel was raised to 159 meters in the air. It has been struck by lightning many times, but the tower really has a utilitarian function: it is a seaside landmark for naval vessels. From 1549 until 1625, before the tower was burned from a lightning strike, it was the tallest structure in the known world.

During the Soviet era, the KGB used the church’s spire as a radio tower and surveillance point. Today the building now houses a Baptist church.

The tower's viewing platform offers tourists one of the best views of Tallinn, and is open to the public from April through November of each year.
Image by A.palu on Wikimedia under Creative Commons License.