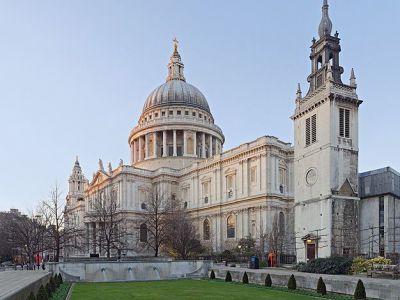 Ludgate Hill, one of three ancient hills in London, has been the site of a place of worship since 604 AD. The present building on the hill is St Paul’s Cathedral, and it is quite rightly one of the most famous of London’s landmarks and the most visited cathedral in the world, after St Peter’s Basilica in Rome.

Between 604 and the Great Fire of 1666, there had been several churches on the hill, and after the last one was destroyed in the Great Fire, Sir Christopher Wren was commissioned to build a new, bigger one. He had to make five different designs of the building before one was finally chosen; work began in 1675 and the cathedral was officially opened in 1711.

The interior of the cathedral is very beautiful with the inner dome painted with 8 monochromes by Sir James Thornhill, depicting the life of St Paul. The inner dome holds three galleries: the internal Whispering Gallery takes its name from the unique acoustics – a whisper against the wall on one side of the gallery can be heard on the other side. Above this is the external Stone Gallery and above that is the external Golden Gallery.

In the Nave there are three chapels: on the North aisle are the All Souls Chapel and the St Dunstan’s Chapel; on the South aisle is St George and St Michael Chapel. The Knights Bachelor Chapel and the OBE Chapel are to be found in the crypt.

The tombs of Lord Nelson, the Duke of Wellington and Sir Christopher Wren are also in the crypt, along with tombs and memorials to many others who have made a great contribution to the nation, including artist and musicians. Sir Winston Churchill’s funeral was held here, and of course, the marriage of Prince Charles to Lady Diana was celebrated in the cathedral.

***Charles Dickens Tour***
St Paul’s Cathedral, as a setting, is featured heavily in many novels by Charles Dickens. In "Master Humphrey’s Clock", for example, Dickens describes Master Humphrey going up to the top of St Paul’s Cathedral, then the tallest building in London, for the panoramic city view. He writes: ‘Draw but a little circle above the clustering house tops, and you shall have within its space, everything with its opposite extreme and contradiction, close beside’.

Another Dickens's work – "David Copperfield" – takes Peggotty to the top of St. Paul’s to enjoy the impressive views over London, which is something visitors still do today.

The area around the iconic cathedral Dickens knew well and frequented himself for various reasons, including major public events, like the funeral of the Duke of Wellington in 1852.

*** Harry Potter Movie ***
Other than architecture- and history buffs, nowadays Harry Potter fans also have their reason to visit St. Paul’s Cathedral. The point of interest for them is the spectacular spiral Geometric Staircase (also known as the Dean’s Stair) that appears to be floating out of the walls of the Cathedral’s South West Bell Tower. Recognizable from “Harry Potter and the Prisoner of Azkaban”, this winding staircase leads to the astronomy tower and is where students climbed up the stone steps towards Professor Trelawney’s Divination classes held in a classroom atop a Hogwart’s North Tower. It was also featured in “Harry Potter and the Goblet of Fire” as the Turris Magnus staircase. To view the staircase, you will need to enter the Cathedral on a visitor ticket.

***Shakespeare Walk***
The medieval St Paul’s Cathedral, predecessor of Sir Christopher Wren’s landmark dome design, was one of the largest European churches of its time, whose spire dominated the skyline of London until it burned down in the Great Fire of 1666. During Shakespeare’s lifetime, the area around St Paul’s was very different to what it is today.

Apart from being the centre of religious, political, cultural and social life in the city, the Cathedral was also the heart of London’s book trade and its environment was quite important in shaping the literary works of that period. By 1600, Shakespeare was the most published professional dramatist, and the first editions of his plays including Titus Andronicus, Richard II, Richard III, 1 Henry IV, 2 Henry IV, Much Ado About Nothing, and The Merchant of Venice were all bought and sold in St Paul’s Churchyard. It is also very likely that Shakespeare himself scouted the local bookshops for content that would furnish him with source material for his own work. In large part, the environment of St Paul’s shaped Shakespeare’s writing and influenced its survival and reception.

Why You Should Visit:
An architectural masterpiece and symbol of London during the War.
There is always much to explore, both above ground and in the crypt.

Tip:
You have to pay for the entrance of this cathedral. Buy tickets online to save time. You can also buy an audio tour at the entrance.
To really appreciate the interior, you should climb the steps to the dome (which should take a good 30 min.) You will find an external viewing area at the top.
Part way up there is also a whispering gallery from which you look down into the church from above.