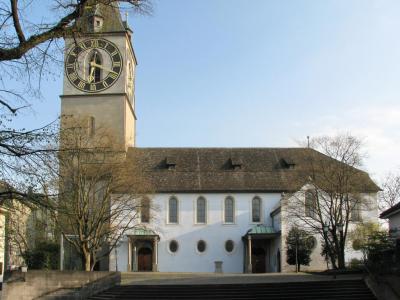 St. Peterskirche (St. Peters Church) was built in the 9th century, which makes it the oldest church in Zurich. It also boasts the fame of having the largest clock face in all of Europe, measuring 8.6 meters (28.3 feet) in diameter. This translates to a minute hand that is 5.7 meters long (18.8 feet)!

The church was significantly altered in the 13th century and again in the early 1700s. Up until 1911, a firewatcher manned the steeple. It was his job to loo5.73k out the windows four times an hour to look for fires. If he spotted a fire, he was to sound an alarm and point to the direction of the fire with a flag. Apparently, this ended up being an effective strategy because unlike many other European cities, Zurich never suffered any devastating fires.

The interior of the church features a Baroque nave and a Romanesque choir with some faded medieval murals including a glimpse of a saint. An fascinating sight to see inside the St. Peters is the name of God in Hebrew above the pulpit, indicating the Reformation emphasis on the original biblical languages.

One interesting fact about the church is that it has split ownership. The City of Zurich owns the church tower, while St. Peter’s parish of the Swiss Reformed Church owns the belfry and bells, as well as the staircase leading to the tower.