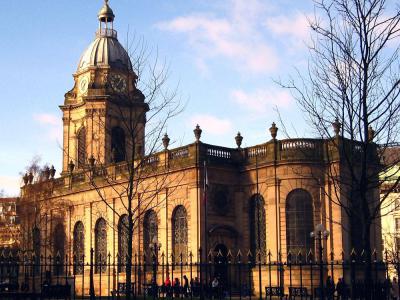 The Cathedral Church of Saint Philip is the Church of England temple and the seat of the Bishop of Birmingham. This Baroque-style edifice was created by Thomas Archer and constructed between 1711 and 1715. That same year it was consecrated as a parish church.

Prior to engaging in this project, Archer had visited Rome and his design is influenced by the churches of Borromini, being rather more Italianate than churches by Christopher Wren. St Philip's tower was completed by 1725, and the urns on the parapet were added in 1756.

In 1905, St Philip's became the cathedral of the newly formed Diocese of Birmingham; in large part this was due to the actions of Joseph Chamberlain, the ex-mayor of Birmingham.

During the Second World War, the cathedral was bombed and gutted on the 7 November 1940. Its most significant treasures, however, including several windows by Edward Burne-Jones, had been removed in the early stages of the war. They were replaced, unharmed, when the building was restored in 1948.

Today, the cathedral is a listed historic building. Six of the monuments inside have heritage listings too, including one commemorating two men who died during the construction of Birmingham Town Hall and a memorial to the victims of 1974's Birmingham pub bombings.
Image by G-Man on Wikimedia under Creative Commons License.
Sight description based on wikipedia