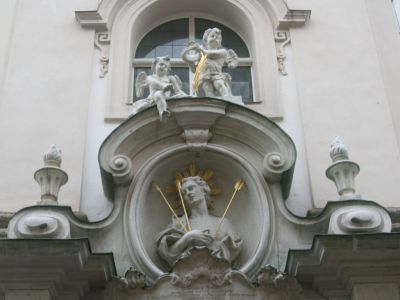 The St. Sebastian’s Church is a 16th-century Catholic church in Salzburg. The attached cemetery is the final resting place of many well-known merchants and scholars.

The St. Sebastian Church was built by the Austrian architect and stuccoist, Kassian Singer between 1749 and 1753. It had a baroque architectural style with some Rococo elements. The original church had beautiful ceiling frescoes and an altar painting by artist, Paul Troger. A fire destroyed the altar and frescoes in 1818. The church was later restored and a statue of St. Sebastian made by Konrad Asper between 1614 and 1620 was installed in the façade. Mass is celebrated entirely in Latin even today.

Prince- Archbishop Wolf Dietrich von Raitenau planned the cemetery to replace an older graveyard in 1600. The design was inspired by the Italian Campo Santo or sacred field. It had a central square surrounded by arcades. At the centre of the square is a brightly tiled mannerist mausoleum built for Archbishop Wolf Dietrich. His remains are interred in the mausoleum. At the entrance of the cemetery is the mausoleum of the scientist and scholar from Salzburg, Paracelsus.

***Mozart Walking Tour***
Saint Sebastian Cemetery is where many members of the Mozart family are buried. Because of the close proximity to the Wohnaus the family often came to the Saint Sebastian Church (built in 1505) for Catholic mass. The most important graves are those of Mozart’s father Leopold, Wolfgang’s wife Constance, and her second husband Georg Nissen who was a Danish diplomat. Constance (Konstanze) and Nissen worked together on Mozart’s biography which was published in 1828, two years after she was widowed for the second time. While the family graves are small, it is easy to find them near the giant Mausoleum.