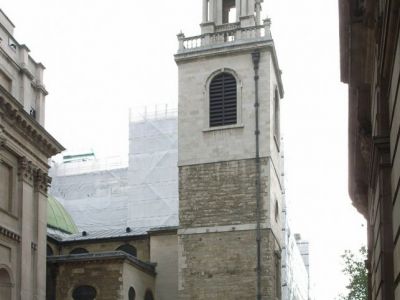 You really should take time to visit St Stephen Walbrook Church situated next to the Mansion House (the official residence of the Lord Mayor of London).

The Walbrook is a small river running from the City Wall into the River Thames – hence its name. In the 7th century a Saxon church stood on the west side of the brook. It was demolished and rebuilt in 1439 on the east side. This church was destroyed in the Great Fire in 1666 and Sir Christopher Wren was commissioned to build the new one.

The new church was built over the brook which now flows through a concrete tunnel underneath the building. The church is considered one of Wren’s finest churches, with its 63ft dome centred over a square of 8 columns. The circular base of the dome is supported in its turn by 8 arches that cross each other in the style of a Byzantine squinch. The building was a bit damaged during the Blitz of 1941, but was soon restored.

You can’t miss the beautiful white stone altar by Henry Moore in the centre of the church, but you might be surprised to see a telephone in a glass box on display. This telephone is the first one ever used by the Samaritans, a confidential emotional support service who have a “hot-line” 24 hours a day and give help and advice by telephone, letter and e-mail. The Samaritans were founded in 1953 by Dr Chad Varan, the rector of St Stephen Walbrook. On the left wall of the church, you can admire the painting “Burial of St Stephen” by Benjamin West.
Image Courtesy of Wikimedia and Steve Cadman.
Sight description based on Wikipedia.