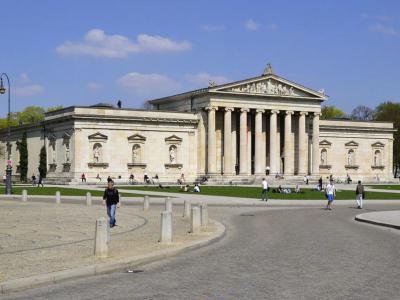 Greek, Roman and Etruscan artworks are displayed at this museum, located in the Kunstareal art district of Munich. The works formed part of the extensive collection of the Bavarian Royal family.

King Ludwig I commissioned architect Georg Friedrich Ziebland to design the neoclassical building, that houses the museum, in 1848. From 1869 to 1872, it served as the Royal Antiquarium. Later, the works by the rebel art group, the Munich Cessation, were displayed here, after which, in 1919, the New State Art Gallery moved in. The structure was badly damaged by the World War II bombings. It was rebuilt and opened its doors again in 1960 with the display of the Bavarian State Collection of Antiques.

The main exhibits are from the collection of antiques of the Wittelsbach House, the Royal family that ruled Bavaria. The major works are those acquired by King Ludwig I, including a valuable Attic Vase collection. Other objects are from private donors: Paul Arndt, James Loeb and Hans von Schoen. Small antique objects, glassware, terracotta objects, jewelry and artifacts made of gold and silver are also on display. The Greek Pottery collection at the museum ranks as one of the finest in the world.