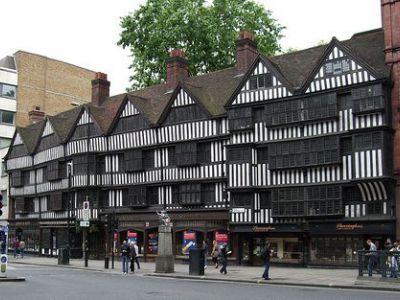 Looming over the Chancery Lane underground station, on the South side of High Holborn, is a set of rather crooked 16th-century Tudor-style black-and-white, timber-framed wooden buildings known as Staple Inn. A passageway wedged under the buildings leads into an inner courtyard that Dickens described in his last (and unfinished) novel "The Mystery of Edwin Drood" as a “little nook composed of two irregular quadrangles.”

It was here that Mr. Grewgious, one of the novel's lead characters lived. Dickens's novelistic descriptions of the spot still bear true today: “It is one of those nooks, the turning into which out of the clashing street, imparts to the relieved pedestrian the sensation of having put cotton in his ears and velvet soles on his boots.”

This courtyard was familiar to Dickens in the late 1820s because he worked in a solicitor’s office on the other side of High Holborn at Gray’s Inn, one of the four Inns of Court. Contrary to what the word “inn” usually means today – a “pub”, the Inn of Court is a professional association and a boarding school for young lawyers. Dickens also saw this 7-gabled roof building every day when he lived here as a young man, at the time when he started a career of journalist.
Image by Jim Linwood on Flickr under Creative Commons License.