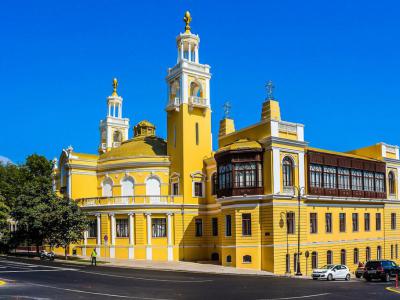 The society was originally organized as a club for the wealthy of Baku, who attended it for banquets and entertainment. On 11 August 1937 after the building underwent renovation it was named after composer Muslim Magomayev. In 1936, the club was reorganized into a residence for the Philharmonic society aimed at promoting Azerbaijani classical and folk music. The opening of the fully renovated building took place on 27 January 2004. The main building consists of the Summer Hall (1100 seats) and the Winter Hall (610 seats) joined by a single stage.
Image Courtesy of Wikimedia and Sefer azeri.
Sight description based on Wikipedia.