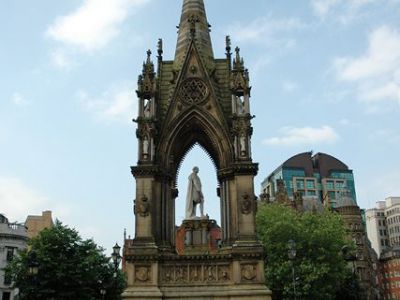 The memorial to Prince Albert is the largest and most distinctive of the many statues and monuments that stand in Manchester's Albert Square. A green square of open space facing Manchester Town Hall, the public gardens hold statues of locally and nationally significant figures, and a fountain built to celebrate Queen Victoria's diamond jubilee. Prince Albert, Victoria’s husband was a popular member of the royal family, held in particularly high regard for his anti-slavery campaigning. The Queen famously mourned the death of her husband until her death some forty years later, in 1901. The surrounding square, amongst countless other places and buildings in the UK, also bears his name.

The statue depicts the former Prince Consort in military regalia, designed by Matthew Noble, and was erected in 1867. Victoria herself approved the statue of her late husband, Prince Albert, who died of typhoid fever at just 42 years of age.. The statue is surrounded by an unusual, ornate stone archway, known as a ciborium. The surround was conceived by architect Thomas Worthington, possibly inspired by the similarly ornate Walter Scott monument in Edinburgh. The carved figures on the arch represent the four arts, the four continents of the world, the four agricultural seasons and the four sciences – mathematics, astronomy, chemistry and mechanics.
Image by Mattcoxonline on Wikimedia under Creative Commons License.