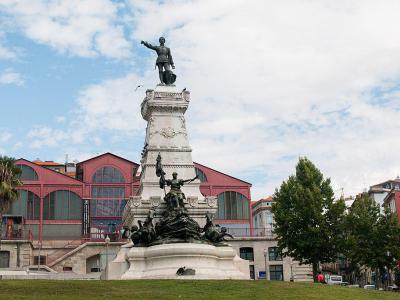 The statue of Prince Henry the Navigator, was first installed in Porto in 1894. The creation of sculptor Tomás Costa, it celebrates the life of this 14th century prince who is famous for his many maritime discoveries. The prince was the fifth son of King John I who was the founder of the Dynasty of Avis.

Born in 1394, Prince Henry was a master seaman whose expeditions and military exploits are famous. He was credited with securing significant trade routes for Portugal, making the country the world's major economic power of the time. It was under the leadership of Prince Henry that Portugal sent expeditions around the Ivory Coast of Africa, which gave Portugal access to the vast riches of Africa, including gold. He was rewarded for his discoveries with many titles, including appointment as the leader of the Order of Christ.

The monument is located near the Ribeira section of Porto. It has a very tall pedestal with the sculpture of the Prince who is turned toward the ocean and points authoritatively, as if giving orders to his men. The pedestal has relief sculptures encrusted thereupon, depicting scenes from the life of Prince Henry.
Image Courtesy of Wikimedia and Daniel VILLAFRUELA..
Sight description based on Wikipedia.