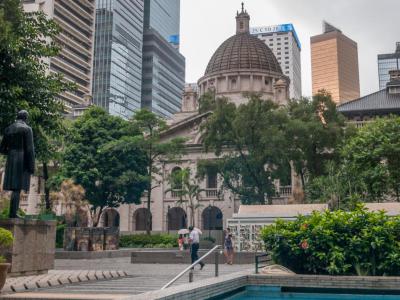 Statue Square is a pedestrian square located in the center of Hong Kong. It is located between Chater Road and Des Voeox Road Central. Statue Square is in a busy shopping area that is a short, one minute walk from Chater Park. It is also near the Centopah, a monument that memorializes those killed in wars.

The name of Statue Square may be confusing to a new tourist to the city. Visitors may think it is named after the only statue in the square, which is that of Sir Thomas Jackson. In reality, the square is so-named because it was once home to a number of statues of British royalty, the first of which was Queen Victoria. During World War II, occupying forces from Japan removed the statues.

Other statues that were once in the square included Prince Albert, the Duke of Connaught, King Edward VII, King George V, Queen Alexandra, Mary of Teck, Henry May and a statue commemorating World War I titled "Fame."
Image by Wilfredor on Wikimedia under Creative Commons License.