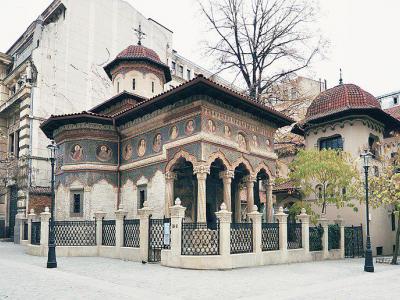 Stavropoleos Convent, also known - during the last century when the convent was dissolved - as Stavropoleos Church, is an Eastern Orthodox nunnery in central Bucharest, Romania. Its church is built in Brâncovenesc style. The patrons of the church are St. Archangels Michael and Gabriel. The name Stavropoleos is a Romanian rendition of a Greek word, Stauropolis, meaning "The city of the Cross". Among other things the convent is particularly famous for is Byzantine music; it has a choir and the largest collection of Byzantine music books in Romania.

The church was built in 1724, during the reign of Nicolae Mavrocordat (Prince of Wallachia, 1719-1730), by archimandrite Ioanichie Stratonikeas. Within the precinct of his inn, Ioanichie built the church and a convent which was economically sustained with incomes from the inn. In 1726 abbot Ioanichie was elected metropolitan of Stavropole and exarch [the deputy of a patriarch] of Caria. Since then the convent he built has been known as Stavropoleos, after the name of its old seat. On February 7, 1742 Ioanichie, aged 61, died and was buried in his church.

The inn and the monastery's annexes were demolished at the end of the 19th century. Over time the church suffered from earthquakes, which caused the dome to fall. The dome's paintings were restored at the beginning of the 20th century. All that remains from the original nunnery now is the church, alongside the building, dating back to the early 20th century, which shelters a library, a conference room and a collection of old (early 18th century) icons and ecclesiastical objects, as well as parts of the wall paintings recovered from churches demolished during the communist regime. This new building was constructed to a plan by architect Ion Mincu.

The convent's library contains over 8,000 books on theology, Byzantine music, arts and history. There are patristic, biblical, dogmatic, liturgic, historical, homiletic, catechetic writings, as well as classic languages dictionaries and textbooks, studies on Byzantine art and Orthodox iconography, plus those on the Romanian history and civilization of the 18th century. Some of the books have been donated from the personal library of art historian Vasile Drăguţ, former rector of the Bucharest University of Arts.
Image Courtesy of Wikimedia and stavropoleos.
Sight description based on Wikipedia.